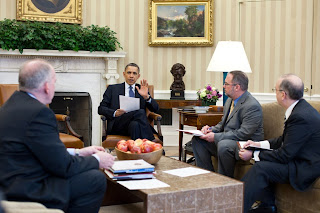 
The President spoke this evening by telephone with Japanese Prime Minister Naoto Kan to discuss the status of ongoing relief efforts in Japan, including the emergency at the Fukushima nuclear plant. The President again conveyed his deep condolences at the tragic loss of life and the widespread suffering in Northeastern Japan. The President emphasized that the U.S. is determined to do everything possible to support Japan in overcoming the effects of the devastating earthquake and tsunami that struck on March 11. The President briefed Prime Minister Kan on the additional support being provided by the U.S., including specialized military assets with expertise in nuclear response and consequence management. The two leaders also discussed the welfare and safety of American citizens in Japan and the President described steps that the U.S. is taking in this regard. He thanked the Prime Minister for his commitment to help American residents. Prime Minister Kan briefed the President on the status of Japanese actions to contain the nuclear emergency and to bring the situation under control. The Prime Minister expressed Japan’s appreciation for the extensive humanitarian, technical and other support provided by the United States. The two leaders reaffirmed that U.S. and Japanese experts and officials would continue to cooperate closely and they agreed to remain in close touch through this challenging period. The President promised that the United States will always stand by Japan, our close friend and ally. The President expressed his extraordinary admiration for the character and resolve of the Japanese people, and his confidence that Japan will make a full recovery from this disaster.