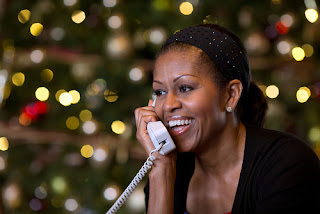 REMARKS BY THE FIRST LADY


TO CHILDREN ON THE
NORAD SANTA TRACKER CALL

MRS. OBAMA: How old are you, Lilli?

MRS. OBAMA: How old are you?

MRS. OBAMA: Eleven, yeah. You sound like the mature one in the group.

LILLIANA: I saw the TV show when everybody was decorating the White House. About how many Christmas trees do you think that there are around the whole White House?

MRS. OBAMA: Around the entire White House we have 54 Christmas trees this year.

MRS. OBAMA: A lot, yeah. We had a lot of Christmas trees. And it’s a pretty big house, and they have trees in every part of the White House. There is a tree in the Oval Office where the President works. And there’s trees outlining all the entrances of the White House. So we have a lot of trees, so it’s very exciting. One day you have to come and visit us during the Christmas holidays because the house is really pretty. You think you could do that one year?

ABIGAIL: I would, too!

MRS. OBAMA: Well, you all should come. So do you want to know where Santa is? Because I’m working with—I’m looking at the satellite right now and they told me that when they last spotted Santa he was over Italy. So now he’s in Europe, in Italy. And he’s going to be in Palermo for a few seconds, but then he’s heading to Naples, Italy. And right now, according to my sources, he’s delivered more than 3 billion gifts already. Can you believe that?

ABIGAIL: Wow! I looked at it and the numbers were rising like every millisecond.

MRS. OBAMA: They are moving so fast. It’s amazing, but that’s how fast Santa Claus is. I mean, it’s like magic what he can do. Well, you know what, guys, I hope you all have a very merry Christmas, okay? Because I can tell you guys have been good this year, haven’t you?

LILLIANA: Thank you for taking the time to talk to us. Bye!

MRS. OBAMA: Oh, it was great talking to you guys. Try to get to bed early, okay? I know it’s hard, but try to close your eyes and get some rest.

MRS. OBAMA: All right, you guys have a merry Christmas. It was great talking to you.