Follow me here, because this has gotten lost amid all of the republican and tea party propaganda. Republicans clearly rule politics and democrats are a spineless bunch of wimps, never aligning to agree on anything, squandering the power they had at the beginning of Obama's term, only to lose it in the mid terms.
But the facts are these: 2.6 million jobs were lost before Obama took office, 524,000 in Dec. 2008 alone and 1.9 million in the final four months of 2008.
When Obama took office in Jan. 2009, job growth began to rise. Has it been enough? No. But this has been a recession like no other, a recession that WAS NOT caused by Obama. And yet, republicans have successfully blamed Obama for causing the recession and for not turning it around. The recession happened on republican watch and it can be argued that both democrats and republicans are to blame for the recession. But the only thing the Obama administration has done is improve things. But yet, you would never know it. Was the administration too optimistic in thinking it could recover more quickly than it actually could? Yes. But overall, the trend is in the right direction.
Since Dec. 2009 through March 2009 (Obama signed the stimulus mid-February 2009) employers were adding 85,000 jobs per month.
Take a look at this BLS chart.  It will take a while to make up for depth of losses that occurred before Obama took office. That's the reality. Electing a republican president would be rewarding scummy, albeit clever, politics. 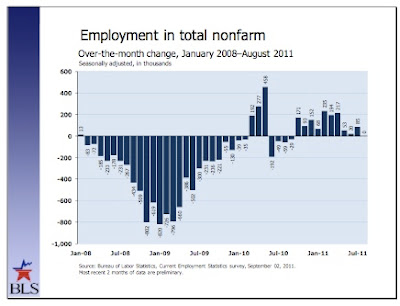