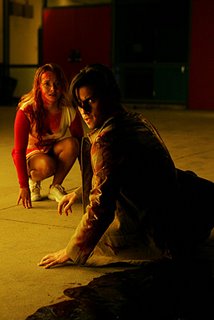 save the world.... does anybody watch Heroes? this show is the best, but i've heard zero buzz. i hope it doesn't get cancelled. it's about ordinary people with extraordinary powers. a cheerleader who can heal her body, a cop who can read minds, the heroin addicted painter who paints the future. one of the funniest characters, hiro, who's from japan, can travel through time. they're all getting around to meeting each other. who knows what they're supposed to do but we've been led to believe that they are going to save the world from some doomsday.

but there are bad guys with super powers. sylar and the the evil politician who can fly. just what the world needs. Ha!

there are others who may be good or bad. we don't know yet.
it's a large cast of mostly unknown actors as far as i can tell.
it all kind of takes place within a graphic novel. watch it! you'll be hooked.
Posted by Olga at 10:21 PM