Toronto, November 30, 2006 -- A groundbreaking new book by Canadian author Mirit Eliraz explores the inner mechanics and communal life of the four most popular rock bands in the world. 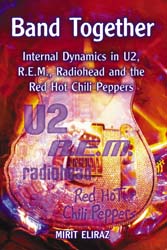 In Band Together: Internal Dynamics in U2, R.E.M., Radiohead and the Red Hot Chili Peppers (McFarland & Company Publishers, 2006), the members of these iconic groups discuss the long-term collaboration within their respective units. Band Together looks at the relations between the bandmates, their shared artistic vision, their chemistry, the division of labor and proceeds within the group, the roles each member plays, how they cope with collective fame, how they remain united (and what factors test their commitment to each other), how the unit is governed, how the musicians collaborate in the studio, how they interact on tour, and much more.

“If you have ever wondered what it’s like to be part of an enduring and tight-knit rock band, this is the book for you,” says Eliraz.

The book features photos of the bands, as well as an extensive bibliography and detailed index.

McFarland (www.mcfarlandpub.com ) is a leading U.S. publisher of scholarly, reference and academic books that are sold worldwide. The company is recognized for its serious works in a variety of fields, including the performing arts.

Description
From The Joshua Tree to Blood Sugar Sex Magik, from Automatic for the People to OK Computer, they produced some of the most memorable rock albums of the post-punk era. Beyond the music, though, the members of U2, R.E.M., Radiohead and the Red Hot Chili Peppers share several common bonds. Having emerged from punk’s do-it-yourself ethos, they embody collective creativity over individual artistry. With the exception of the Chili Peppers’ revolving-door guitarists, each band’s lineup has remained stable while the groups outlasted most of their contemporaries. The twin factors of group-inspired music and long-term collaboration make these four bands important case studies in modern rock and roll.

With a focus on internal creative dynamics, author Mirit Eliraz studies four of the most popular, critically acclaimed, and prolific rock bands of the last quarter century. Introductory chapters offer band bios; reasons for formation; and each group’s friends, collaborators and business partners. Middle chapters discuss the governing structures and general relations within the bands; obstacles to unity and survival; how diverse elements are merged into a productive whole; role divisions; the collaborative process; and life on the road. Concluding chapters cover external influences on band dynamics; the evolution of each band’s communal life; and challenges to the band paradigm.
author's email: bandtogetherbook@gmail.com