Dang it!
If you want to see John Frusciante these days, you got to see the Mars Volta.
This from the Rolling Stone:

System of a Down have had an ambitious year, releasing Mezmerize -- the first of their two-part album Mezmerize/Hypnotize, which debuted at Number One -- and touring Europe, as well as playing a guerilla tour of small venues in nine U.S. cities. Considering their bombastic year, which culminates in the release of Hypnotize this fall, System's massive new tour is less of an arena-rock spectacle and more straight-up rock & roll.

Opening for System at the sold-out Long Beach Arena in California were fellow guitar-heavy, counter-culture rockers the Mars Volta, who provided a far more visual show with oversized psychedelic projections. Guitarist Omar Rodriguez-Lopez was in fine form after recovering from a stomach ailment that forced the band to cancel its European tour dates earlier this year. And while rumors of an onstage collaboration between Rodriguez-Lopez and System frontman Serj Tankian proved to be just that, Red Hot Chili Peppers guitarist John Frusciante surprised the audience by guesting on nearly the entire Mars Volta set.

Once System hit the stage, they powered through an hour and a half of material. Although they opened with cuts off of the latest album, the hard-hitting "B.Y.O.B." and "Revenga," System's set list featured several tracks off their eponymous 1998 debut and follow-up, 2001's Toxicity. In contrast to the Mars Volta's environment, System's set was sparse, save for a few plush rugs, minimal L.E.D. projections and a nice long row of Marshall amps. For such a big arena show, the stripped-down set seemed to underscore the sense that this band has nothing to prove.

Read the rest here
The Man 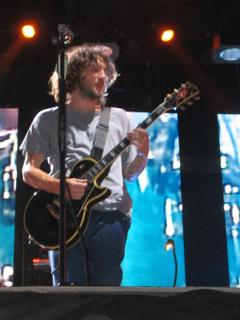