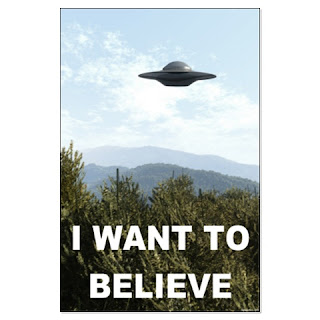 who doesn't love a good ufo story. apparently, chicago airport workers spotted one, according to today's Chicago Tribune. there's also a video at the site, but not one of the ufo, just the reporter saying that the witnesses were serious but the FAA denied it at first.
original case report

Published January 1, 2007
It sounds like a tired joke--but a group of airline employees insist they are in earnest, and they are upset that neither their bosses nor the government will take them seriously.

A flying saucerlike object hovered low over O'Hare International Airport for several minutes before bolting through thick clouds with such intense energy that it left an eerie hole in overcast skies, said some United Airlines employees who observed the phenomenon.

Was it an alien spaceship? A weather balloon lost in the airspace over the world's second-busiest airport? A top-secret military craft? Or simply a reflection from lights that played a trick on the eyes?

Officials at United professed no knowledge of the Nov. 7 event--which was reported to the airline by as many as a dozen of its own workers--when the Tribune started asking questions recently. But the Federal Aviation Administration said its air traffic control tower at O'Hare did receive a call from a United supervisor asking if controllers had spotted a mysterious elliptical-shaped craft sitting motionless over Concourse C of the United terminal.

No controllers saw the object, and a preliminary check of radar found nothing out of the ordinary, FAA spokeswoman Elizabeth Isham Cory said. to read the rest you have to register, unfortunately.

here's what some of the eyewitnesses said:

"I tend to be scientific by nature, and I don't understand why aliens would hover over a busy airport," said a United mechanic who was in the cockpit of a Boeing 777 that he was taxiing to a maintenance hangar when he observed the metallic-looking object above Gate C17.

"But I know that what I saw and what a lot of other people saw stood out very clearly, and it definitely was not an [Earth] aircraft," the mechanic said.

One United employee appeared emotionally shaken by the sighting and "experienced some religious issues" over it, one co-worker said.

A United manager said he ran outside his office in Concourse B after hearing the report about the sighting on an internal airline radio frequency.

"I stood outside in the gate area not knowing what to think, just trying to figure out what it was," he said. "I knew no one would make a false call like that. But if somebody was bouncing a weather balloon or something else over O'Hare, we had to stop it because it was in very close proximity to our flight operations."

if you see one, here's the report form
Posted by Olga at 3:37 PM