Irv Kluger, a passionate jazz drummer who played with nearly every great musician, died recently.
I took lessons from the spirited and wacky Irv, who used to teach at Mahoney's drum shop in Las Vegas. He used to tell me, once I felt comfortable, I could sit in with his band at Pogos. Well, I never made it there, but he played at Pogos right up until his death. I still practice with the thick binder of handwritten lessons he gave me. Rest in peace, Irv. 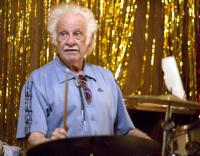 Drummer moved many during long career
By Ed Koch