It's a John Frusciante day

It's raining again. While I like the rain, enough already.
John is going back into the studio with the Chili Peppers to make another record. 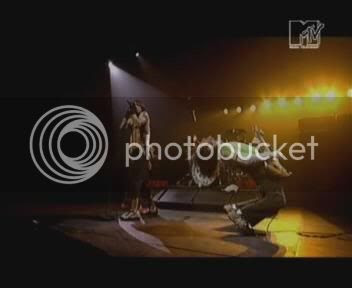 a recent story in Guitar World, typed by fans at John's fan site.

JOHN FRUSCIANTE opens a window to his soul on the intimate, acoustic CURTAINS

"There are an infinite number of great songs out there" , says John Frusciante . "I don't think we'll ever exhaust the possibilities of a few simple guitar chords." That the Red Hot Chili Peppers guitarist truly believes this was made clear when he recently recorded a series of six solo discs, which he then released at a rate of approximately one per month . Embracing styles from indie rock to electronica to "unplugged," the recordings are a testament to the fertility of Frusciante's imagination and the breadth of his musical tastes .

CURTAINS (Record Collection), the final disc in the series, is an album of primarily acoustic guitar-driven songs characterized by their poignant melodicism, occasionally eccentric structure and lyrics that are both abstractly philosophical and emotionally resonant . While Frusciante has made extensive use of the acoustic on 2003's SHADOWS COLLIDE WITH PEOPLE and other solo albums, CURTAINS is his most fully realized unplugged work to date . The guitarist skillfully augments his crisp acoustic chording and expressive vocals with overdubs on synthesizers and electric guitar , and he benefits from his tastefully minimalist backing of stand-up bassist Ken Wild , Autolux drummer Carla Azar and The Mars Volta's Omar Rodriguez-Lopez on electric guitar . But mostly we hear Frusciante , who recorded CURTAINS in his living room , strumming and singing songs that express his unique notions about the nature of time, death, and dimensions beyond our own .

Like the other five albums in the series, CURTAINS was recorded quickly and on vintage analog gear - in this instance an Ampex eight-track tape machine. Frusciante says he was out to capture both the warm sound sound of the pre-digital era and the inspired spontaneity of recordings from the Fifties and Sixties, when artists would typically have just one day to record a song and a few weeks to complete an entire album. One upside of this approach is that it enabled Frusciante to commit a huge body of work to tape in a short period of time.

"I write a lot of songs," he says, "and they mean a great deal to me and represent my growth in a lot of ways. But as the guitar player in the Red Hot Chili Peppers, I don't have the time to record my own stuff as much as I'd like."

So when the Chili Peppers recently took a half-year break after touring behind their last album , 2002's BY THE WAY, Frusciante made the most of the opportunity. "During those six months I recorded all the music that's been coming out ," he says . "It's basically material from the last three years, but each album also contains new things - half of CURTAINS , for example , was written during that break ."

Like Frusciante's electric guitar playing in the Chili Peppers, his songs are fresh, inventive and more than a tad off kilter. Frusciante recognizes this and regards it as a strength. "What I try to do," he says, "is make words say what they weren't naturally designed to say."
Posted by Olga at 6:49 PM