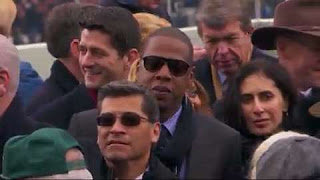 It would seem the GOP doesn't want to change. Frankly, I'd like to see a GOP better suited to serve the nation. That way we could have arguments based on policy, rather than bigotry, bias and personality. Not much in their "renewal" plan.


Gwen Ifill:
Instead of Mitt Romney, he was greeting the musician Jay-Z. ("He came up and shook my hand and was very friendly," Ryan said later.)

When Ryan took his seat, the lawmaker seated next to him - who he wouldn't name -- leaned over. Who were Jay-Z and Beyonce, the lawmaker wanted to know?

That's as handy a way as there is to describe the gulf that endures these days between Democrats and Republicans. The winners get to paint the day in the colors they choose. The losers sit eight rows back. Read more at PBS

Bobby Jindal says the GOP has to stop with the bizarre and act like adults. I don't think his comments went over very well:

Paul Ryan is a twit. This Q and A with the press shows where Gwen got her info. Ryan contradicts almost  every economist that says we need revenue and spending cuts, including SNAP (food stamps). He says we only need to make spending cuts. Ryan appears to believe as if he knows it all. Here's the part that's fascinating, Paul Ryan says Obama's reelection wasn't a rejection of GOP principles. He says Obama only won on communication and technology.
On climate change, Ryan says taxing carbon-based energy isn't the answer. On gun safety, he was wishy washy.