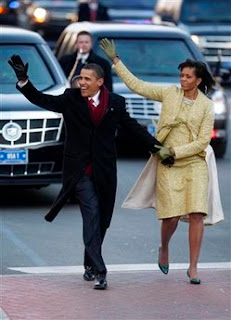 
Obama will swear in on three Bibles: The Robinson family Bible, Lincoln's Bible (as he did in 2009) and Martin Luther King's traveling Bible. See video below.

National Day of Service Summit on the National Mall

Historically, Inaugural Ceremonies are not held on a Sunday because Courts and other public institutions are not open. This year, in accordance with the requirements of the United States Constitution, President Obama and Vice President Biden will officially be sworn-in on Sunday, January 20, 2013.

On Monday, the President and Vice President will be sworn in the traditional ceremonial swearing in ceremony at the U.S. Capitol that is open to the public.

Location: Viewing stands and bleachers are lined along Pennsylvania Avenue

The Commander in Chief’s Inaugural Ball

As he did at his first Inauguration in 2009, President Obama will host the Commander-in-Chief’s Ball to honor America’s brave service members and their families, a tradition started by President George W. Bush in 2005. Active duty and reserve military, Medal of Honor recipients, and wounded warriors and their spouses will attend. Troops from around the world will also be able to join the celebration virtually.

Location: Washington Convention Center – Halls A, B and C

Americans across the country are invited to share in the celebration at The Inaugural Ball, a unified celebration for all Americans that will span every hall in the Walter E. Washington Convention Center.

President Obama, Vice President Biden, and their spouses will attend a prayer service on Tuesday morning.

Obama will swear in on Martin Luther King's Bible and Abraham Lincoln's Bible (see video below).

Tickets (none required for the swearing in ceremony)

This just in, Beyonce will sing the National Anthem. Other performers include James Taylor and Kelly Clarkson.

Alicia Keys, Brad Paisley, Katy Perry, John Legend, Stevie Wonder and Usher will perform at the Kids' Inaugural Concert  Jan. 19. Anthony, Nick Cannon, Smokey Robinson, and members of the cast of Glee are expected to perform at the official Inaugural balls on Jan. 21.

Richard Blanco is the inaugural poet.  Read his works here.

Remember Bobak, Curiosity, Mars? They'll be at the inaugural parade.  More fun stuff that NASA is doing during inauguration week.

A guide to attending the inauguration parade and a list of who's participating.

Obama's inaugural limo will bear the plates in support of DC: "Taxation Without Representation"

Map of road closures in DC and pedestrian routes.

Guide to the balls and galas during the inaugural period, Jan. 16-25.

Day of Service
Saturday, January 19th, 2013
President Obama will ask Americans across the country to organize and participate in service projects in their communities to honor our shared values and celebrate the legacy of Dr. Martin Luther King, Jr. On this day, President Obama, First Lady Michelle Obama, Vice President Biden, Dr. Jill Biden, and members of the President’s Cabinet will participate in service projects in the Washington, D.C. area.

Find out how you can serve your community. Sign up to get involved in this year’s National Day of Service.

Kids’ Inaugural: Our Children, Our Future
Saturday, January 19th, 2013
Through initiatives such as Let’s Move! and Joining Forces, First Lady Michelle Obama and Dr. Jill Biden have made America’s children and military families two of their most important priorities in the White House.

As part of their continued commitment, Mrs. Obama and Dr. Biden will host a concert for America’s children and families as part of the 57th Presidential Inaugural, titled “Kids’ Inaugural: Our Children. Our Future.” It will take place at the Walter E. Washington Convention Center on January 19th, the Saturday evening before the inauguration, and will highlight support for military spouses and children, honoring and celebrating their service and sacrifice.

Official Swearing-in
Sunday, January 20th, 2013
President Obama will officially be sworn in on Sunday, January 20th, 2013 at noon in a ceremony officiated by Supreme Court Chief Justice John Roberts. Surrounded by family, friends, and staff, the President will place his hand on the Robinson family bible, selected specifically for this occasion, and recite the 35-word presidential oath of office written in the constitution. Vice President Biden will be sworn in by Associate Justice Sonia Sotomayor at the Naval Observatory and will use the Biden Family Bible.

Ceremonial Swearing-in
Monday, January 21st, 2013
On Monday, January 21st, at his ceremonial swearing-in at the United States Capitol, President Obama will place his hand on two bibles, one owned by President Lincoln, the other by Dr. Martin Luther King, Jr., and recite the 35-word presidential oath of office written in the constitution. Vice President Biden will be sworn in using the Biden Family Bible.

Inaugural Luncheon
Monday, January 21st, 2013
Following the ceremonial swearing-in on at the west steps of the United States Capitol, President Obama, Vice President Biden and members of their families will attend an inaugural luncheon hosted by the Joint Congressional Committee on Inaugural Ceremonies. The Luncheon is an Inaugural tradition that dates back to President William McKinley’s first inauguration in 1897.

Approximately 200 guests will join the President, Vice President and members of the Joint Congressional Committee on Inaugural Ceremonies at the luncheon, which will be held in the National Statuary Hall. A painting by Ferdinand Richard of Niagara Falls, selected by the Chairman of the Inaugural Committee, will serve as a backdrop for the head table. Music will be provided by the University of Rochester Eastman School of Music.

At the luncheon, the President and Vice President will be presented with official gifts from the Congress on behalf of the American people.

Inaugural Parade
Monday, January 21st, 2013
The Inaugural Parade includes participants representing each of the five branches of the Armed Services, all 50 states, and a variety of national groups—representing the best of American service and values. Led by the President, Vice President, and a traditional military Presidential escort, it will begin at the east front of the Capitol, then west on Constitution and Pennsylvania Avenues, followed by north on 15th Street and west on Pennsylvania Avenue past the Presidential Reviewing Stand. The President, Vice President, and their families, friends, and other guests then review the rest of the parade from the reviewing stand.

Inaugural Balls
Monday, January 21st, 2013
Americans from across the country have been invited to share in the inaugural celebration at The Inaugural Ball on January 21st, 2013, a unified celebration for all Americans that will span every hall of the Walter E. Washington Convention Center. The Presidential Inaugural Committee has made a limited number of tickets for The Inaugural Ball available online to the general public on a first-come, first-served basis. Unfortunately, due to overwhelming demand, tickets are no longer available.

Additionally, in keeping with the tradition started by President Bush in 2005, President Obama will honor the brave men and women of our country’s armed services and their families at the Commander-In-Chief’s Ball. Tickets to the Commander-In-Chief’s Ball are being provided free of charge to invited guests, who will include active duty and reserve service men and women, Medal of Honor recipients, and wounded warriors and their spouses, among others. Troops from around the world will also have the opportunity to join the celebration virtually.

National Prayer Service
Tuesday, January 22nd, 2013
The morning after the ceremonial swearing-in, a National Prayer Service will be held at the Washington National Cathedral, continuing a tradition that began with President Washington in 1789 and was revived for President Roosevelt in 1933. The service will bring together a diverse group of dignitaries and Americans to celebrate the power of faith through prayer, readings and musical pieces. Attendance is by invitation only and tickets are required.