Obama signs 23 executive orders (see below) on gun control and put the NRA in its place. Alas, Obama put the safety and the liberty of American people ahead of gun irrationalists.
Read the full plan. Read the letters kids wrote to Obama on gun violence.
Sen. Feinstein announced today that she's introducing legislation Jan. 24 to ban assault weapons. Even so, democrats could be a hitch in moving forward on reducing gun violence. Check out this chart, which shows NRA ratings of members of Congress.
Read Reagan's letter advocating a ban on assault weapons.
Even H.W. Bush favored gun control, banning imports of assault rifles after school kids were murdered in 1989.
Full video:

Obama's remarks: PRESIDENT OBAMA: Thank you, everybody. Please -- please have a seat. 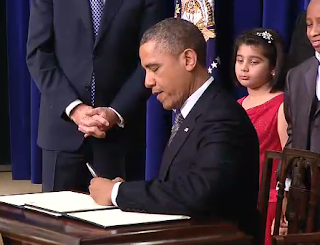 Good afternoon, everybody. Let me begin by thanking our vice president, Joe Biden, for your dedication, Joe, to this issue, for bringing so many different voices to the table, because while reducing gun violence is a complicated challenge, protecting our children from harm shouldn’t be a divisive one.


OBAMA: Now, over the month since the tragedy in Newtown, we’ve heard from so many. And obviously, none have affected us more than the families of those gorgeous children and their teachers and guardians who were lost. And so we’re grateful to all of you for taking the time to be here and recognizing that we honor their memories in part by doing everything we can to prevent this from happening again.

But we also heard from some unexpected people, in particular I started getting a lot of letters from kids. Four of them are here today, Grant Fritz (ph), Julia Stokes (ph), Ini Zeha (ph), and Teja Goode (ph). They’re pretty representative of some of the messages I got. These are some pretty smart letters from some pretty smart young people. Hinna (ph), a third-grader -- you can go ahead and wave Hinna (ph), that’s you. Hinna (ph) wrote, “I feel terrible for the parents who lost their children. I love my country, and I want everybody to be happy, and safe.” Read on

Gun nutters are already having a cow, but no responsible gun owner has any reason to fear any of Obama's executive actions:

Today, the President is announcing that he and the Administration will:

3. Improve incentives for states to share information with the background check system.

4. Direct the Attorney General to review categories of individuals prohibited from having a gun to make sure dangerous people are not slipping through the cracks.

5. Propose rulemaking to give law enforcement the ability to run a full background check on an individual before returning a seized gun.

6. Publish a letter from ATF to federally licensed gun dealers providing guidance on how to run background checks for private sellers.

14. Issue a Presidential Memorandum directing the Centers for Disease Control to research the causes and prevention of gun violence.

15. Direct the Attorney General to issue a report on the availability and most effective use of new gun safety technologies and challenge the private sector to develop innovative technologies.

16. Clarify that the Affordable Care Act does not prohibit doctors asking their patients about guns in their homes.

17. Release a letter to health care providers clarifying that no federal law prohibits them from reporting threats of violence to law enforcement authorities.

20. Release a letter to state health officials clarifying the scope of mental health services that Medicaid plans must cover.

23. Launch a national dialogue led by Secretaries Sebelius and Duncan on mental health.