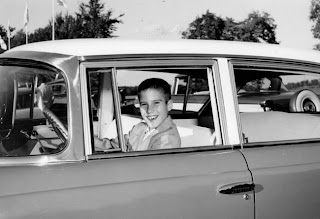 As R-money tries to reinvent history and pretend that he didn't write an op-ed in 2008 saying "Let Detroit Go Bankrupt," or pretend that what he said had another meaning, as Obama was making the bold decision (there were many naysayers, including Mitt) to save the auto industry, this cute photo of Mitt, 11, is the Mitt that he's now selling. Mitt's father was also the head of American Motors in the 1950s, but from what I've read, George Romney isn't much like his son. But then again, we don't really know much about Mitt, other than the fact that he's loaded and he changes his mind. A lot. The photo below is Obama promoting U.S. auto exports in a trade deal with S. Korea's President Lee. From the NYT:


In the first paragraph of his 2008 article, Mr. Romney made an unmistakable prediction: “If General Motors, Ford and Chrysler get the bailout that their chief executives asked for yesterday, you can kiss the American automotive industry goodbye. It won’t go overnight, but its demise will be virtually guaranteed.”

In fact, General Motors announced last month that it had earned $8 billion in profits in 2011 and set a target of $10 billion for 2012. Chrysler this month reported a profit of $225 million for the fourth quarter of 2011. 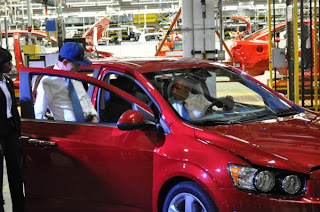 That economic reality poses a risk for Mr. Romney if voters in Michigan simply remember the headline of his earlier article and conclude that he was — and remains — indifferent to the plight of the workers there, and wrong about what should have been done in Detroit. And Democrats are doing everything they can to cement that perception.