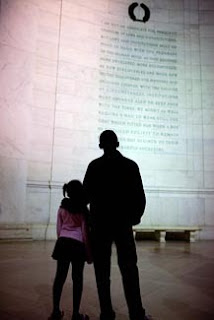 Obama and Sasha at Jefferson Memorial
UPDATE Oct. 15: SEE VIDEO OF THE TOWN HALL HERE.
Note the time is Louisiana time (it's at 2:15 eastern). There will be live audio here.
Update: The president will arrive at Louis Armstrong International Airport at about 11:30 a.m. and likely travel by Interstate 10 to New Orleans, where he will stop about noon at Martin Luther King Charter School in the Lower 9th Ward. He will proceed to the University of New Orleans for a town hall meeting at 1:15 p.m. Shortly after 2 p.m., the president's entourage will return to the airport. NOLA

The town hall should be live streamed at cnn.com, msnbc.com or whitehouse.gov/live. I'll post details on time and place when they're up. In New Orleans...

With the president will be Secretaries Napolitano, Donovan, and Duncan, who "will each participate in events throughout the community to review recovery progress."

From New Orleans, POTUS heads to San Francisco for a DNC fundraiser that evening, and then Friday he flies to College Station, Texas, for a Presidential Forum on community service hosted by former President George H.W. Bush and the Points of Light Institute at the George Bush Presidential Library Center on the campus of Texas A&M University. Politico

Bobby Jindal will be on hand:

"The president's administration has achieved some truly great things in the short time since taking office," Landrieu said Thursday evening. "If this visit is too brief, it will not afford the president the opportunity to see first-hand the impact that an effective and committed administration can have on rebuilding neighborhoods and communities."
Earlier in the day, Vitter sent a letter to Obama, cautioning, "If the town hall is the only major event of the visit, I truly think it will be deeply disappointing to most citizens."

The White House Thursday evening indicated that plans for the president's trip are still being finalized, and would not confirm that a town hall was on the agenda, leaving open the possibility that a different and perhaps more extensive itinerary was in the works.