Obama To Visit Russia, Italy and Ghana in July 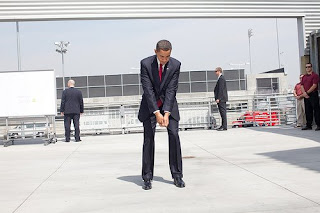 Obama practices his golf swing on the go
Update: Michelle and the girls will be going along on the trip.
July 6-8: Obama will be in Russia meeting with Russian President Dmitry Medvedev.
July 8-10: Obama will attend the G8 in Italy (Canada, France, Germany, Italy, Japan, Russia, the United Kingdom and the United States).
July 10-11: Obama will visit Ghana

U.S. President Barack Obama will travel to Moscow for talks with Russian leaders, attend a Group of Eight summit in Italy and visit Ghana in a wide-ranging foreign tour in July, the White House said on Saturday.

Obama will also chair a meeting on energy and climate change with leaders of the world's top economies while attending the G8 summit in L'Aquila, Italy, from July 8-10.

It will be Obama's fourth major international trip since taking office in January pledging to repair the United States' image abroad after eight years under his predecessor, George W. Bush.

Obama, who has promised a "reset" in sometimes strained relations with Russia, will visit Moscow from July 6-8 at the invitation of Russian President Dmitry Medvedev. Reuters

Obama will visit Ghana's capital to strengthen U.S.-Ghana relations and highlight Ghana as a success story because it has become a stable democracy:

Obama, along with his wife, Michelle, will visit Accra, Ghana, on July 10 and July 11, the White House said Saturday. It will follow Obama's trip to the G8 summit in L'Aquila, Italy, from July 8 to July 10.

There's some fascinating Ghana history via a series of video clips here. Ghana's first president after it achieved independence in 1957 was Kwame Nkrumah, who was educated in the U.S. and England. He led as a dictator and was tossed and for a while the military ran the country. Ghana is the size of Oregon.
Atta Mills, who eked out a win in 2008, in action (April 2009):
Posted by Olga at 8:18 AM