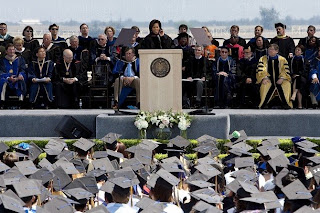 Video below!
Update: 2:30 Michelle about to speak. UC Merced didn't hold back in Obamaisms, that's for sure. UC honored Michelle with a young children's garden. Michelle said she decided to give the commencement speech because the students inspired her. She received thousands of letters and Valentines. Her staff said "you have to do this. You have to go here."
Michelle Obama's commencement speech will be live streamed here, or here, or here, and probably at CNN.com. Her speech will begin at about 1:30 p.m. pacific time.
The Merced Sun-Star newspaper is all about Michelle Obama today, as it should be. The newspaper got very local. I'm always surprised when Obama travels to a city to do a town hall or something and the local newspaper puts up one link. No wonder they're going out of business. I'll post video of the speech when it's up. Meanwhile:

The university's story of how they got Michelle Obama to come is almost as interesting as her being there.
A long-shot campaign:

Until today, when first lady Michelle Obama will finally address the first full four-year graduating class at UC Merced.
The grassroots campaign that first got ignored now has the world watching.
"We wanted it to be very special," said Sam Fong, one of the students credited with the campaign to court Obama.
"It's going to mean a lot to a lot of people. It will be different for everybody," the group's informal leader, Efferman Ezell, said the day the news became public. "Words can't really explain it. It really is a great feeling."
Ezell, Fong and Yaasha Sabba spent hours in the university library crafting personalized letters to big players in the Obamas' lives -- people such as Michelle Obama's brother and Charles Ogletree, Merced native and mentor to both Mr. and Mrs. Obama at Harvard Law School. (Ogletree delivered the keynote address at the campus' opening ceremony in 2005.)
They printed 2,000 Valentine's Day cards with a pearl-and-heart design. All of them were addressed by hand "to incorporate as many personal touches as possible," Sabba said.
More than 900 students wrote personal messages persuading Obama to accept the invitation.
Another 50 students lent their voices to a YouTube video called "We believe."
The students had other "Dear Michelle" campaign events in mind, including a plan to break world records and then dedicate the feats to Michelle Obama. Those plans never got off the ground because Ezell never dreamed the student organizers would hear back so quickly. Sun-Star